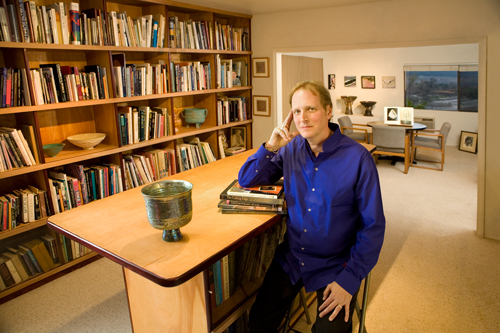 A funny thing happened to Kevin Wallace on the road to becoming a rock star.  He became a curator and a writer and, in July 2007, director of the Beatrice Wood Center for the Arts.  Along the way, Wallace’s quest for knowledge took him to college classes, to libraries and bookstores, and as the information highway exploded, to the internet.  “Every day is about learning,” he says,  “an endless array of information is available to everyone.”   He is an acknowledged expert on self-expression in craft media who resists labeling works as “art” or “craft.”

He is concerned that artists and critics can become trapped in language that isolates and prevents communication. To a large extent, his aim is to bring contemporary art to the public, to encourage us to see as much we can.  He fully understands the need for art criticism, the role history plays in judging art and how art influences the way we see and interpret the world,  And, maybe, why it’s more important than rock n’ roll.

Kevin Wallace’s documentation took place in 2008 and was co-sponsored by Dick and Betsy Chess and Tom and Gerri McMillin. The FOTM Archive contains extensive information about this artist.