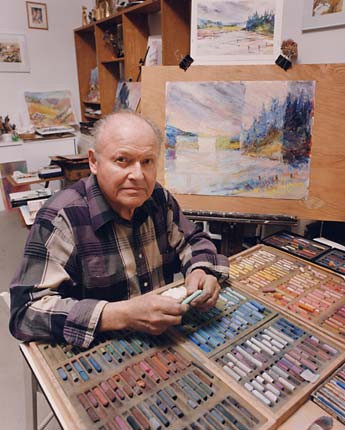 With his wonderful wit, playful sense of humor and quotes of wisdom, Bill McEnroe shared with FOTM how, in 1950, he was plucked upon graduating from Stanford University to develop the art department at Ventura College. He mused with a smile, “I thought Ventura would be a temporary stop en route to Yale.”

Armed with a keen knowledge of art history, McEnroe knew in order to build an outstanding art department, he would not only need good teachers; he would need exceptional artists who, in their own right, were making a name for themselves within the contemporary art scene. Among the esteemed artists Bill first hired were Jack Baker for painting and William Winterbourne for ceramics. Soon, the full time art faculty expanded to fourteen including Carlisle Cooper, James Danisch, Barney Dietz, Robert Fogata, Ellis Jump, Gerd Koch, Harry Korn, Richard Phelps, Tom Roe and Hiroko Yoshimoto. Part time faculty included Daisy Hassell, Wesley Johnson, Norman Kirk, Viqui McCaslin, Debra McKillop, Mary Michel, Robert Smith and Myra Toth among many others. In addition to teaching watercolor, Art History, Art Appreciation and Scene Design at Ventura College for thirty two years, McEnroe chaired the Fine Art Division for fourteen years and was the Founding Director of the New Media Gallery. Soon, after the District unified each department; Art, Music, Theater, Photography and Dance, under the Fine Art Division, the departments blossomed collaborating on major theatrical and musical productions. Bill referred to this period in Ventura College history as The Golden Years.

Bill McEnroe had a love for music and drama. Working with fellow faculty members Al Wilkinson, Leroy Haberman and Frank Salazar, he designed and built numerous stage sets. Among his most notable set designs were Amahl and the Night Visitors for a 1963 Ventura College production and Dark of the Moon presented for the 1965 Grand Opening of the new Ventura College Theater Building. In addition to his work at Ventura College, Bill was a Scenic Designer for South Dakota’s Black Hills Playhouse Summer Stock from 1970 to 1979. In 1984, Bill designed the stage set for Johann Strauss’s Die Fledermaus for Ventura County Master Chorale and Opera Association production at the Oxnard Civic Auditorium.

William McEnroe was born in Fargo, North Dakota and grew up in Massachusetts where he received his first formal art training as a teenager at the prestigious Boston Museum School of Fine Arts.

Enlisting in the Navy in 1942, Bill took Quartermaster training and was assigned to the sub-chaser “Felicia.” Later he was assigned to a high speed troop carrier in San Francisco which delivered 5,000 troops to various South Sea battle areas in ’44 and ’45. Bill was aboard the first ship to enter the Japanese harbor of Osaka, after the bombs were dropped at Nagasaki and Hiroshima.

In 1946, he entered California State University, San Jose on the GI Bill, where, in 1949, he received a Bachelor of Arts Degree majoring in Art and Theater. In 1950 he was accepted to Stanford University and received his Masters in Art. Both degrees were awarded with Honors. Post graduate work included studies at UCLA, the University of Oregon, and the University of Mexico. He was a Professor Emeritus in Art from Ventura College, where he taught for thirty two years, retiring in 1982.

In 1989, after spending a short time living in Cambria, CA, Bill and his wife, Carolyn, a sculptor, moved to Olympia, WA where two of their five children lived. It was in Washington that Bill discovered pastels recalling, “All of my art junk was in storage when someone gave me a 12 stick set of colored pastels, and, whoopee, I was off!” He became very active in the art community, serving as President of the Olympia Art League while maintaining a busy teaching schedule and exhibiting his work internationally.

Former student and colleague Debra McKillop reflects, “Bill had a passion for art, a joy for teaching and exuberance for life. He had a deep understanding of the nature of light — how a green lawn bounced under a white eave of a building, or the way sun filtered through an avocado orchard to influence the local color of the entire scene. He shared suggestions for color mixing and application, and taught with even-handedness, kindness and intelligence.”

McEnroe’s advice to artists: “The best art is the illusion of Realism and Abstraction. Give yourself permission to play. Your reward is the journey, not the final image. Your goal is not to show a lot of “things” but to create a sense of wonder in the eyes of the beholder.”