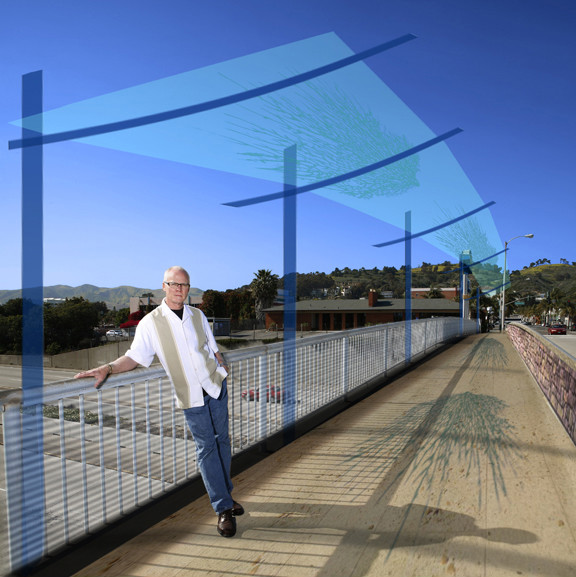 Are minimalist theory and political consciousness unusual? Not for Michael Davis. Michael’s work is informed by Cold War politics of the 50s and political activism of the 60s. “Industrial refuse, the excess of cold war industry, is included in my art materials,” he states. “Minimalism asked us to consider how we see, how we think and how we react.”

Davis’s work includes both public and studio art and is seen throughout the United States. Both reflect his interest in the environment and his desire to explore society’s common denominators. His art becomes a dialog as he investigates the back stories that make his art grounded to the site. He designed the artwork for the California Street/Highway 101 overpass in the City of Ventura, a project that links the beach and the city and mitigates the psychological breach created by the freeway dividing the city.

In this portrait, Donna Granata laid one of the artist’s concepts over the bridge. With every public art project, designs change even up to the point of fabrication. This image documents the early design phase of this monumental project.

Michael Davis’ documentation took place in 2008 and was sponsored by Cherie and John Brant.  The FOTM Archive contains extensive information about this artist.