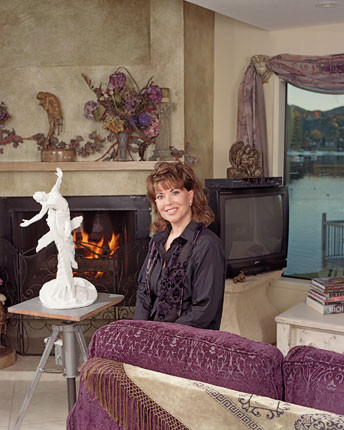 Many have admired her work at the Janss Mall, at the Promenade and at the Crystal Cathedral. A Canadian by birth, sculptor De L’Esprie’s first forays into art began by painting under beds and in closets, haunts that took her away from the chaos in her home. Collecting river-bank clay near a Mohawk Indian reservation led her to the realization that sculpture would be her preferred medium. She dedicated herself to sculpture but only after earning degrees in business and counseling. Her works, notable for a sense of movement, are executed in bronze, a medium she chooses for its strength and timelessness. She sculpts to escape what is ugly in the world, creating powerful and often joyful works that evoke an emotional and spiritual response in the viewer. An underlying philosophy is that out of adversity comes strength. De L’Esprie has a deep appreciation of the architecture of the human form. She is a deeply spiritual artist whose sculptures celebrate both the human and the divine.

De L’Esprie’s documentation took place in 2004 and was sponsored by Jordan and Sandra Laby.  The FOTM Archive contains extensive information about this artist.