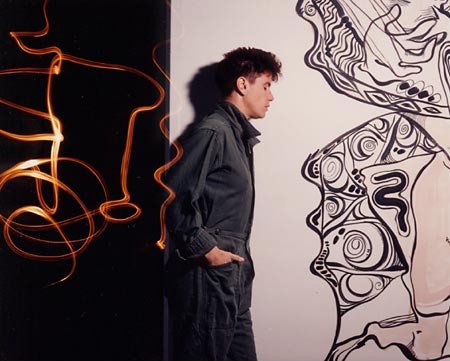 While attending a field trip from Taft High School in Woodland Hills, California, Mary Beth toured the Foster & Kleiser Billboard manufacturing facility. Later that day, staring at the awesome billboards as the bus made its way down Sunset Boulevard, she remembers being struck by the communication potential of image and scale. “I could imagine my art there,” Hanrahan claims. Nearly 10 years later, she moved to Los Angeles to consciously pursue a career as a display artist and prop maker. It was during that time that she began painting. Hanrahan uses large scale, site specific, public painting as a communication device, and as a vehicle for community-based activism and involvement. The idea, the message, and the intended audience determine the art medium she employs on each project. For Hanrahan, money and mediums are a means to an effect. The opportunities for awareness-expansion and innovation exist primarily in the process of bringing her works to life. Among her most respected works is the Tortilla Flats Mural and Reunion Project. A collaborative venture of Michael M. Mora and Hanrahan, the 500’ painting depicts people, buildings, and businesses from the Tortilla Flats neighborhood that was condemned and displaced when the 101 Freeway came through Ventura, California during the 1950’s. The images were derived from photos and oral histories obtained during the course of interviews conducted with former neighborhood residents.

The FOTM Archive contains more information about this artist.