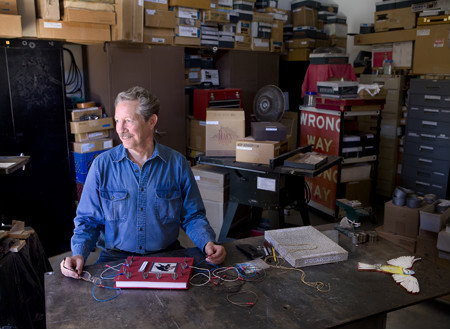 Visiting with Bob Privitt is like gliding through a history of civilization on roller skates. His conversation is peppered with references to Plato, Icarus, Langston Hughes and Countee Cullen. We are dazzled with the various uses of the most utilitarian objects and his visual puns. We explore equal rights for women and the difficult mathematics involved in many of his sculptures. He reminds us to look carefully, to find the right key that will unlock a piece of our life’s experiences. His studio is neatly and methodically arranged – there’s even a drawer for bells and whistles. Literally.

Discussing the development of his career, Privitt comments, “My father was an ironworker. I was expected to follow in his footsteps, and before college, I became an ironworker. In fact that’s how I paid for much of my education. I ‘boomed out’ of the local union hall in states all over the southwest. These experiences caused me to have an interest in balance. I’ve been interested in balance for many years, first as a motorcycle racer, later as an ironworker. Walking narrow metal beams several stories in the air represented both a physical danger and a psychological danger. I tried to show some of this tension in my work.”
As a teacher, Privitt encouraged his students to understand that art is not strictly visual; one needs to use it, to read it, to find out what has been done by others and then make it uniquely personal. He states, “Throughout my teaching career, I’ve tried to encourage students not to dwell on self” expression, but rather to focus on expressing an idea. Once the student deals passionately with an idea, self-expression will follow. I believe a good teacher must never forget that he once could not do what he is now teaching. He must remember the student’s sense of frustration and despair in ever accomplishing the task at hand. He must not place himself in the exalted position of master teacher, but rather in the shoes of an inexperienced student, and then walk slowly hand-in-hand with the student to the end of the task.” Privitt retired from Pepperdine University in 2004. The contrast between the violence and negativity of my father and the gentleness and the positive nature of my grandfather, his father, helped shape my attitude toward life and my attitude toward art. It caused me ultimately to think about a variety of ideas ranging from such things as disenfranchisement, to my very existence.”
Now retired, this humorous, imaginative sculptor is free to create, to be active at Studio Channel Islands, Focus on the Masters and Buenaventura Art Association.
Bob Privitt’s documentation took place in 2008 and was sponsored by Mary and Jim Galbraith. The FOTM Archive contains extensive information about this artist.