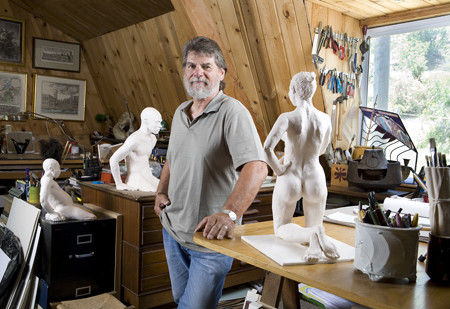 “Creativity,” says Richard Franklin “is what life is all about. It is important to all our humanity.” When FOTM designates an individual as a “Master Artist,” various criteria are considered, such as mastery of the medium, peer respect and recognition, and involvement with the community. Richard Franklin, a talented figurative artist, ceramist, instructor and architect, more than meets these standards. Trained as an architect, Richard began to work for the Navy designing submarines and soon moved on to designing medical facilities across the globe. Throughout his career he always found time to study, explore and practice the fine arts. His life-long love of drawing, combined with his skill as a teacher, make him a much sought-after life drawing instructor. It is clay that provides him with instant gratification, both in creating figure studies as well as functional and decorative pottery. His pottery possesses an Asian flair, its deceptively simple beauty the result of years of perfecting his craft. Richard is a member of the Ojai Studio Artists, past president of the Ventura County Potters Guild, Board of Trustees for the Ojai Art Center and a valued member of the FOTM Board of Directors.

Richard Franklin’s documentation took place in 2005 and was sponsored by Jessica & Stanley Prescott Trust. The FOTM Archive contains extensive information about this artist.