Ojai CA – The public is cordially invited to attend “The Journey Together: Abstract Paintings from Lifetime Partners Gerd Koch & Carole Milton.”  This memorial art exhibition is scheduled August 7 through September 2 at the Ojai Art Center, with a free public Reception & Celebration of Life on Sunday, August 8, 5-8 p.m. featuring live music and refreshments. The Ojai Art Center is located at 113 S. Montgomery St., Ojai, CA.  Gallery hours are Tuesday through Friday 10 a.m. to 4 p.m., Saturday and Sunday 12 p.m. to 4 p.m.

Gerd Koch was born Jan 30, 1929, in Detroit, MI to doting parents who had emigrated from Wuppertal, Germany.  He was reared with traditional German customs, particularly at Christmastime, which influenced him throughout his life.  Gerd received a Bachelor of Fine Art degree in 1951 from Wayne State University, MI and in 1967, a Master of Fine Art at the University of California, Santa Barbara.  In addition to Gerd’s studio practice, the artist dedicated his life to teaching. Beginning in 1953, Gerd taught private lessons and workshops at his Ojai studio. He taught at Santa Barbara City College and UCSB extension classes before joining the full-time faculty at Ventura Community College.  He was a mentor to thousands of students during the 45 years he dedicated to teaching.

Gerd celebrated his love for the beauty of the Ojai landscape in much of his work. He once wrote of Ojai “…the cycles of the seasons and the times of day, paintings of the browns and yellows of California summers and falls, winter with storm clouds over the mountains… these were paintings of inward vision, abstractions that began with these objects influenced by the all-powerful force: time.”

While a resident in Ojai, Gerd became active in the evolving Los Angeles art scene exhibiting at such prestigious galleries as Ed Kienholz’ Now Gallery and the Ferus Gallery, cofounded by curator Walter Hopps, Edward Kienholz, and poet Bob Alexander.  With the addition of Irving Blum, the Ferus Gallery became one of the most pivotal and historic galleries in LA focusing on Pop and Conceptual Art. Ferus was the first west coast gallery to devote a solo show to Andy Warhol. Gerd eventually left Ferus and joined the Esther Robles Gallery on La Cienega Boulevard, in Los Angeles’ burgeoning Gallery Row.

Carole Milton was born July 18, 1931 in Yakima, WA to adoring but pious Christian parents.  Her Grandfather was a famous street corner “Hellfire and Damnation” Baptist preacher. Her mother Myrtie May McKenzie was a skilled jack-of-all-trades and taught Carole sewing but oddly enough not how to cook, saying, “you don’t need to get stuck in the kitchen all your life.”

At eighteen, Carole was accepted to the University of Washington where she hoped to study Art, but her parents refused to let her pursue a major of “loose morals and heathen values.”  So, as Carole told it, she went after her “MRS degree.”  A year later she married Saylor Milton, who would become a Science teacher at Santa Paula High School. Before having children, she was a secretary and when she became a homemaker, she enjoyed dabbling in oil painting.

At age 45, Carole was fast approaching an empty nest.  After years of longing to learn about Art, she boldly signed up for an Art class at Ventura College. Sitting in her car in the college parking lot for 45 minutes, she finally mustered up the courage to walk through the classroom door. And there was the teacher, her future partner, Gerd Koch. We will never know if it was love at first sight, but it did result in a deep life changing impact for both. That summer Carole went on Gerd’s second Art Tour to Europe, and that world exposure to culture changed her life forever. Years later after they each terminated their troubled marriages, they cohabitated and would lead over30 tours to Europe, culminating in a trip of a lifetime to Egypt.

Carole received her Bachelor of Fine Art degree from UCSB in 1982, and became an accomplished abstract oil painter; a bold natural colorist, interpreting reality through the lens of her emotions.  Her final series, “Primal Visions,” depict fantastic cosmic explosions of raw emotional power.

The couple continued to prolifically paint and show, together and separately, until the 2017 Thomas Fire burned their Ventura home to the ground. Carole lost her studio to the flames as well as most of her prized works.  Only a few of her paintings, stored at a safe location, survived, and will be shown in this exhibition.

After the fire, Gerd and Carole moved to Ojai where Gerd’s career began over sixty years earlier.  He continued to paint his masterpieces while trying to entice Carole to paint again, but she was slipping into the decline of Alzheimer’s.  Gerd, although mentally sharp until the end, died of natural causes on June 26, 2020. Carole followed nine months later. Both these beautiful souls left us with the gift of their art, and it will be displayed in their honor this August.  Due to Covid, their Celebration of Life, on Sunday, August 8, from 5 to 8 p.m. will finally allow for an in-person gathering to honor these extraordinary artists. 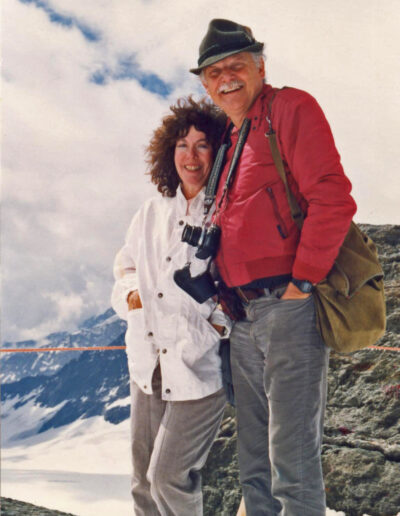