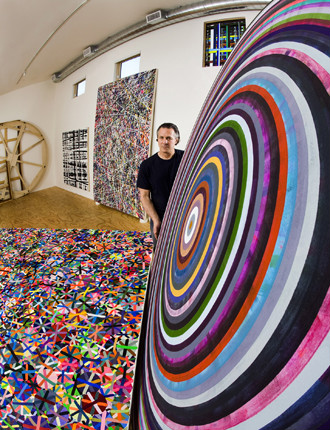 Gary Lang is a radical painter in the modernist tradition whose free hand process has earned the artist international acclaim. Brilliant lines and circles of color draw the viewer deeper into the canvas. Freeform plaids and repetitive geometric shapes shimmer and dazzle the eyes. Describing a Gary Lang canvas is somewhat of an exercise in futility; we have to accept each canvas on its own terms. Lang creates works that are at once calming and nerve-shattering. Acording to Lang, his art is not abstract. “My paintings have their own virtual reality. Just look at it as though it was a rock,” he said. His work can bring order to the chaos that confronts us daily yet it can also reflect emotions on the edge, the risks of the unpredictability of life. His paintings are a kind of “rigorous meditation” and invite a dialog with the viewer. Lang now resides in Ojai after a period of working in New York and, early in his career, Barcelona. He is represented in major museums and private collections.

Gary Langs’ documentation took place in 2006 and was sponsored by John & Cherie Brant and James & Mary Galbraith. The FOTM Archive contains extensive information about this artist.