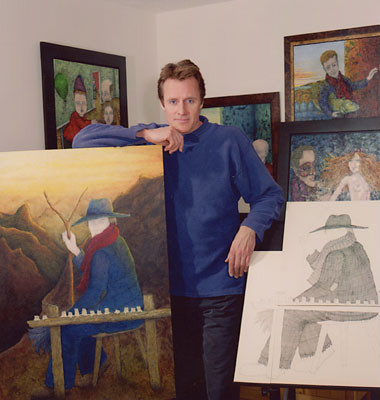 Duncan Regehr was born in Lethbridge, Alberta and raised in Victoria, British Columbia, Canada. In his youth he distinguished himself as a champion figure skater, then had his own radio program at age 16. Regehr was also an Olympic boxing contender, and a classically trained Shakespearean stage performer in his native Canada before tackling Hollywood in 1980, where he began to develop his work in film. From 1986 to the present Duncan Regehr has continued to paint, write, and film throughout the world.

Regehr is a highly accomplished and internationally exhibited artist. As a child he was encouraged by his father, artist Peter Regehr, to develop his talents. He later studied painting with Dutch surrealist Henry Poesiat, as well as literature, psychology and sociology at Camosun College on Vancouver Island.

Regehr first exhibited in 1974 at the Stratford Festival in Ontario. The following year he showed at the Yorkville Art Center in Toronto. Since then, numerous exhibitions in Canada, the USA, Britain and Europe have attracted the attention of museums, critics and the public. His work is found in important collections worldwide, among them are the Smithsonian Institute (West Coast Archives USA), The Jilin Collection (China), The Kunsthallen (Copenhagen), Focus on the Masters Archives for the Getty Museum (USA), and the Syllavethy Collection of Scotland (GB).

Duncan Regehr is a prolific figurative painter whose enormous body of work is profoundly and distinctly poetic. His work revolves around images suggested to the artist through his relationships, his dreams and his many interests. Reaching into the depths of psychology and the unconscious, Regehr’s paintings convey his penetrating observations of humanity and the evolution of his social consciousness.

“The magic of seeing and the seeing of magic are one in the creative experience. Expression of vision feeds, transforms and ultimately becomes reality – magic realized. My art is more than a chronicle of what has already manifested,” said the artist. “It mirrors the intellect and the emotion, and seeks to reflect a view of the universal – the unrealized. The infinite vision of the mind’s eye holds the key to truth. Whether using paint, film or words, it is with that sight that I unveil, interpret, and with all humility and arrogance, aspire to express truth.”

Duncan Regehr is a multi-talented individual who has been recognized for his work in several mediums. An accomplished painter, he has had solo exhibitions in galleries in the United States, Canada and Europe. His writing has included numerous journals and articles. His book “Dragon’s Eye,” a fascinating automonograph, includes many examples of his insightful poetry and 169 color illustrations of his art. His varied roles on television, film, radio and in the theater have been memorable, captivating audiences with his wonderful characterizations.