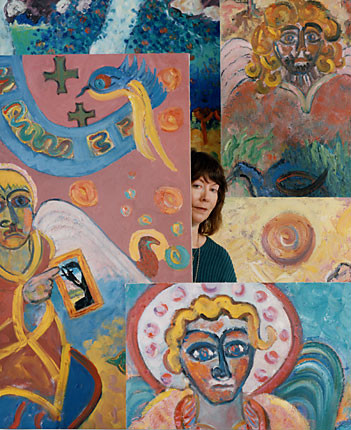 Carol Milton was born and raised in the state of Washington and received her degree in Studio Art from the University of California at Santa Barbara. She also attended the University of Washington and Ventura College prior to receiving her degree in 1981 from UCSB. Milton says her work “expresses my subconscious visions… to my perceptions of reality.” Her work explores “texture, impasto, calligraphy, and buildup of color layers” and creates an image in response to the “impressions, visions, questions, doubts, evaluations, and journeys of my life.” About her paintings and her work in general, Milton states, “I lean toward the Expressionistic school and like to take a philosophical idea and see how far I can go with it.”

In some of her work, Milton has put symbolic figurative images in mystical landscapes that were inspired by her interest in medieval iconography and early Christian symbols. Milton works mainly in oils and loves the buttery feeling and transparency that oil paints produce. She will occasionally work in mixed media and thereby further emphasize heavy texture and total abstraction. Carole Photographed Among Her Angels attempts to illuminate Milton’s quiet and reflective personality, while at the same time capturing her sense of whimsy. The photographic portrait illustrates many of the goals Focus on the Masters strives to achieve. It depicts artists emerging from behind their art. This specific portrait also symbolizes the travesty of many women being overlooked throughout art history. As one first looks at this photograph, you see only the paintings and not the artist.