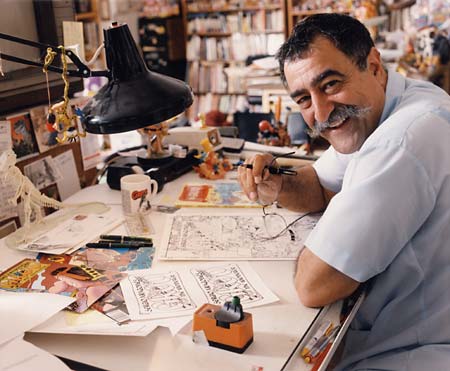 Sergio Aragonés considers himself just a regular guy with a great job, even though illustrating for Mad Magazine since 1962 has earned him numerous accolades, tremendous respect, and considerable notoriety.  He has received every major award within the cartoon industry. Highlights include the National Cartoonist Society’s Reuben Award and the Will Eisner Hall of Fame Award. The National Cartoonist Society of England and the Comic Art Professional Society has honored Aragonés with annual awards given in his name.

Aragonés was born in Castellon, Spain in 1937. Prompted by the Spanish Civil War, his family immigrated to Mexico when Sergio was a young child. He first discovered that his talent as an artist had monetary value in the third grade – when his classmates would pay him to draw homework assignments. He drew cartoons for school newspapers and sold his first commercial cartoon in 1954 at age 17.

While attending the University of Mexico, where he studied architecture, Aragonés became a member of the theatrical department and studied pantomime under the direction of Alexandro Jodorowsky. In addition to communicating stories without words, this experience helped him to understand the movements of the human form. While still in Mexico, he continued to publish his work in various magazines, newspapers and advertising assignments. He contributed weekly to Mañana Magazine for over ten years.

In 1962, he arrived in New York by bus with only twenty dollars in his pocket and his portfolio in his hand. After a hard couple of months (surviving by reciting flamenco poetry in Greenwich Village), he soon began publishing in Mad  Magazine, continuing until 2019 when the magazine ceased publication. His illustrated “gags” could be found in the corners and the margins of every issue. His unique commentaries entitled “A Mad Look at… King Kong, Sports, Weddings, etc…” further demonstrated his wonderfully spontaneous humor. In addition to Mad, he created his own original comic character, Groo The Wanderer.

Sergio Aragonés’ documentation took place in 1996 and 1999 and was sponsored by Cafe Voltaire, Sol Ramon, The Richman Peace and Policy Foundation and Kinko’s Main Branch. The FOTM Archive contains extensive information about this artist.